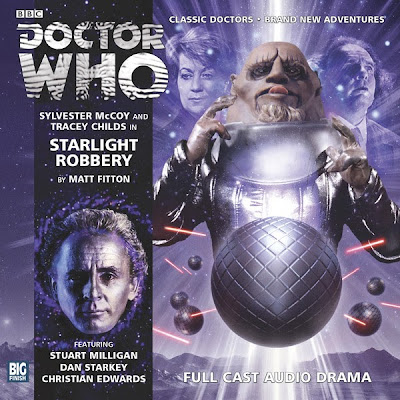 The prospect of Elizabeth Klein meeting the Sontarans was certainly exciting one. So far, the only recurring monster she had encountered was the Selachians from the BBC novels. This audio will be followed by a story with the Daleks. I am not the kind of fan who thinks everything is better with Famous Monsters, but as a massive Klein fanboy, I'm keen to see her do cool stuff like fighting Daleks.

The premise of Starlight Robbery is that Garundel, a Salamader-like arms dealer holds a galactic arms auction to sell weapons to the war-like races of the universe. The highlight of the auction is the Persuasion Machine, the key component of which is Kurt Schulk. Determined to recover, Schulk, the Doctor sends Klein and her lab assistant Wil Arrowsmith to infiltrate the auction. This being a cosmic auction, fans will inevitably find themselves being reminded of Alien Bodies. This story does not come close to the surreal brilliance of Alien Bodies, but it is still funny and enjoyable in a number of ways.

Given the way Nu Who has treated the Sontarans, it is a bit disappointing that the Sontarans here are mostly played for laughs. They are given distinctive voices, which is helpful, but they have none of the intimidating presence of Lynx. However, Garundel, the Urodelian merchant, truly is a character worthy of Robert Holmes. He is hilariously played by Stuart Milligan in a camp American accent. Like the best of Robert Holmes' villains, he is ridiculous up until the point when you realize he is a cold blooded killer who is actually deadly serious. There is a wonder transition between Garundel being funny and Garundel finally becoming deadly serious. In a shocking moment, he shoots dead his former associate for her betrayal.

Starlight Robbery does a lot more with Klein than the disappointing Persuasion. There is a nice moment when she complains about the absurd leather uniform the Doctor has given her as a disguise. She is more compassionate and humane here than her Nazi alternate self, showing shock and disgust at Ziv's death, but she is still cold and detached about Garundel's fate. In an interesting moment, she gives an uncomfortable pause before replying when she is asked by the Sontaran marshal about motherhood. I am a bit worried about the revelation of a connection between Klein and Schulk. I do hope the writers do not make Klein's backstory even more complicated than it already is. I think she deserves to be developed as a proper rounded character, rather than turned into a Moffat style cosmic pixie girl like Amy Pond or Clara.

Will remains as annoying as he was in the previous story. He does have a few good moments, however. One really appreciates his sense of wonder and fascination at everything he sees. He is incredibly impressed with the twenty-first century mobile telephone, coming as he does, from either the late eighties or early nineties. I'm not convinced by the implication that he has not had much experience with women, given the rugged good looks he displays on the cover of Persuasion. The Doctor is largely left out of the action until the third part. I rather like the way Garundel points out his un-trusting, controlling nature.

One complaint I have is that during the auction, there is a lot of screaming in the background. Presumably, this is on video footage that is being played to the guests. However, the noise does give the confusing impression that the weapons are being demonstrated on live victims, a notion that would rather conflict with the dialogue.

I am not really a critic of the arms trade. Governments need weapons and somebody has to manufacture and sell them. Of course, such companies can have unethical practices and there so there is a need for them to be regulated. Given those reservations, I was rather surprised how little this story attempts to satirize or critique the arms industry. I can imagine what a leftist like Jack Graham would say about this story. He would probably point out that the villain turns out to be just a small-time conman, and not a powerful corporation, thus avoiding critique of capitalism. Most of the outrage that the characters express toward Garundel is over the fact that he is ripping off his customers rather than his involvement in the arms trade.

I think Starlight Robbery goes on a little too long. It could probably have been finished in three parts, rather than four. It is however, a vast improvement on Persuasion and is enjoyable throughout.

Posted by Matthew Celestine at 06:29