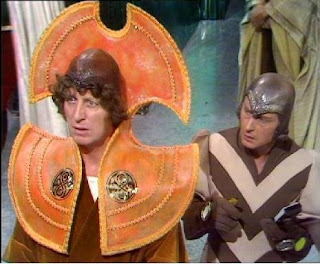 In the view of many fans, the great sin of The Deadly Assassin's is its revision of the Time Lords. The all powerful Time Lords of The War Games are replaced with a cast of senile Oxford dons and Anglican bishops. Being the first substantial portray of Dr. Who's home planet, this story must have come as something of a disappointment for many long term viewers.

As a young fan, my perception of Gallifrey was shaped by the post-Deadly Assassin stories. The Invasion of Time was one of my favorite Target novels, and The Five Doctors was the first VHS release that I watched. I was rather disappointed by the lack of Chancellory Guards and Staser guns in The War Games.

As an older fan, my enthusiasm for Chancellory Guards and Staser guns has waned. I have come to prefer the idea that the Time Lords are a god-like race with incredible power. There is a lot in The Deadly Assassin that I dislike. Yet I still find something likable about the idea of the senior Time Lords being a bunch of Oxford academics. It is also undeniable that the visual iconography established in The Deadly Assassin has become a fundamental part of the show. The genius of Lawrence Miles can be seen in the way he has combined Robert Holmes' Gormenghast Time Lords with the elemental Time Lords of the The War Games. In a clever nod to The Deadly Assasin, his Book of the War tells us that the senility of the senior Time Lords is just an act:

"their mumbling, even their occasional deafness is often quite carefully orchestrated. Nowhere on the Homeworld is there a House so ready to work its will by planting the correct whisper in the relevant ear, by making murmured suggestions so subtle that after the fact nobody remembers who spoke. While House Dvora moves with an efficient unstoppable openness, the mandarins of Lineacrux are so softly spoken, so serene, so elderly that in this brutal new War age even those who should known better rarely remember how ruthless these 'senile old men' might possibly be."

It must be pointed out that the view of the Time Lords given in The Deadly Assassin was not a sudden departure. The Three Doctors had shown them to be less than all-powerful, and Genesis of the Daleks and Brain of Morbius had shown them to have a shifty side. This development shows a considerable departure from how the Dr. Who's relationship with his people was originally conceived. The Hartnell Doctor was an exile, but from the beginning he showed a genuine desire to return to his homeworld. When Susan speaks about her planet, it is described as a beautiful place, with its burnt orange sky and silver trees. The Gallifrey of The Deadly Assassin seems such a miserable and grim place that it is hardly a surprise that Dr. Who would want to leave it. If Gallifrey is like that, there is no longer any sense that the Doctor has suffered loss or sacrificed anything in leaving it. For this reason, I very much prefer the idea that Gallifrey is a beautiful and magnificent place, whatever the faults of its ruling elite.

If this serial can be forgiven for its depiction of Gallifrey, and I'm not sure it can, it cannot be forgiven for its appallingly badly thought out plot. The Master's scheme makes no sense and the Time Lords society makes even less. Are we really expected to believe that the Time Lords have been completely unable to figure out the nature of the Rod and Sash of Rassilon and that they have no idea where their electricity comes from? I very much agree with the Prosecution case (presumably Lawrence Miles) in About Time, which castigates The Deadly Assassin's plot as utterly contrived:

"But perhaps the real trouble with "The Deadly Assassin" is that aside from the occasional snack-bite of political satire, everything here is so thoroughly contrived that it's alien in all the wrong ways. The script makes up new rules for Time Lord society minute-by-minute, so what chance does the audience have of feeling as if it's any of their concern? If the Doctor reaches a dead end then a new piece of Time Lord technology or custom can be invented to help him get to the next scene, and if characters aren't in the right places then they can be shifted around by Time Lord "traditions" which everybody knows about except the viewer."

For some reason fans seem to love episode three with the nightmare sequence in the APC Matrix. I don't understand why, as it does nothing to advance the plot and feels tediously long. I have a real dislike of dream sequences in fiction. If what the character is experiencing is not real, why should the viewer or the reader care about it? It is just a string of scary events strung together without actually going anywhere. What is more, this episode indulges the worst aspect of the Hinchcliffe era, a morbid delight in pain and cruelty. It is easy to laugh at Mary Whitehouse, but this episode pushes up the violence in the show to a level that is probably not quite appropriate for younger viewers. The BBC made a wise decision in bringing Hinchcliffe's producership to an end after this story.


What I enjoy most in this serial is Angus Mackay's performance as Borusa. Borusa is such a wonderful character, a school teacher turned into a Machiavellian politician. I love the way the schoolboyish way Dr. Who addresses him as 'sir.' There is such a deep sense of respect between the two characters, which adds to the beautiful poignancy when Davison's Doctor exclaims "What happened to you, Borusa?" in The Five Doctors.


For all its failings, The Deadly Assassin makes a bold attempt to tell a very different kind of Doctor Who story. We get to see the Doctor on his own planet, stripped of the reassurance of his scarf and without a companion to rely on. I don't like this story, but I appreciate the attempt to experiment and do what had not been done before.
Posted by Matthew Celestine at 09:47