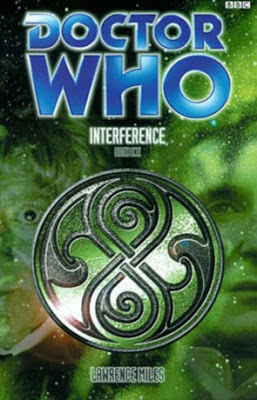 Do you remember the Nirvana song In Bloom? In that song, Kurt Cobain sneered at the listener who:

I imagine I'm probably the equivalent reader of Lawrence Miles' books. I love Lawrence Miles books and count myself a fan, but I suspect I haven't really understood what they are about. I also suspect, in the unlikely instance of Lawrence Miles ever reading this blog, that he would hate the fact that a Tory like me, who stands for everything he is against, is a fan of his work. So I'm an odd fan for Lawrence Miles, and possibly not the best person qualified to review his work.


Interference is uniquely for a Doctor Who novel, published in two volumes, Shock Tactic and The Hour of the Geek. It seems very surprising that BBC books were willing to do this. This is certainly a novel written on a grand epic and cosmic scale, but it has to be said that it is overly long. The first volume is very slow moving, with the plot unfolding at a snail's pace. The Doctor in particular, spends a good deal of the first volume imprisoned in a jail cell, contributing little to events. The second volume is faster paced, but the whole novel is in much need of trimming down a bit.

While Interference is overly long and poorly paced, it is undeniably well written and of a much higher standard than a lot of Doctor Who novels. Miles switches between different genres; diary entries, movie scripts, television documentary dialogue as well as more standard novelistic prose. A couple of scenes are cleverly turned into film and television drama, with one character described as being played by Nicole Kidman and another by Wesley Snipes. In a particularly glorious chapter, the Dark Times of Gallifrey are retold as a BBC costume drama with Rassilon played by Brian Blessed!

Interference does all the things that I love about Lawrence Miles books. There is the cosmic sense of scale, the playful use of continuity and the grappling with big intellectual ideas. I think Miles does better with these things in his other novels, but I enjoyed them no less in this work.

Interference is very political. It deals with the issue of the arms trade and how British companies were selling electro-shock batons in the late nineties. While I am not against the arms trade in general (it does play a pretty big part in our economy and every country needs an air force), I think everyone ought to agree that this country should not be exporting torture equipment. Lawrence Miles deserves credit for spotlighting the issue.


The novel has generated a lot of controversy for the way it re-writes Doctor Who continuity. As a result of the intervention of Faction Paradox, the Third Doctor regenerates before his encounter with the Great One on Metebelis 3 and as a result of a gunshot wound. This is a really interesting trick, even if it falls foul of my own dislike of 'timey-wimey' (I hate that word) stuff. Whatever one's opinions of Miles subversive retcon, he does a beautiful job of portraying the Pertwee Doctor. His classic regeneration line, A tear, Sarah Jane? is made even more poignant when he follows it with This is wrong. In a typically postmodern touch, Miles has the Third Doctor observing that the story he is in does not feel like one of his typical adventures.

Miles' portrayal of the Eighth Doctor is a little more problematic. He does next to nothing in the story. He spends a major part of the first volume suffering brutal torture in a Saudi Arabian prison. I'm not quite convinced by the idea that the Doctor would be completely helpless in the situation in which he is placed. In all his adventures, has he never experienced the kind of random brutality that overwhelms him here? That sort of thing is pretty common on Earth, so I don't see why other worlds have not cottoned on to the idea of random brutality.

The Doctor's prison cell discussion is very interesting. He admits to his cellmate that he interferes on future colonies, but he never interferes on Earth without being able to give any rational reason why. I don't buy this. In my opinion, the reason the Doctor does not interfere on Earth is because he knows he can't change history, not one line. When the Doctor interferes in the future, he is not changing history, but participating in it. His knowledge of the future is not exhaustive, so he has no reason to worry about failure on his part. If he tried to overthrow Hitler in 1938, he would know his failure was inevitable. He has no idea of the fate of Terra Alpha, so he can try to overthrow Helen A without worrying about the consequences.

Sam is handled very well in this book. She is given real depth of personality. The only problem is that she ends up looking a bit stupid. Compassion suggests to Sam that if she is against electro-shock batons, she should also be against matchsticks, as they can also be used to torture people. I can't believe any intelligent person would be unable to see a logical flaw in this proposition. Strangely, Sam does a lot of running around in high heels for somebody who is not used to wearing them. I loved the use of the older Sarah Jane Smith in this story. She is given a personal life and an identity beyond her travels with the Doctor. She also interacts nicely with Sam. I am not a K9 fan, but he was great in this too.


Interference is an overly-ambitious work that has some problems, but I enjoyed it as much as any of Lawrence Miles' books. The cameo appearance of Iris Wildthyme is a nice treat too.

Posted by Matthew Celestine at 11:17