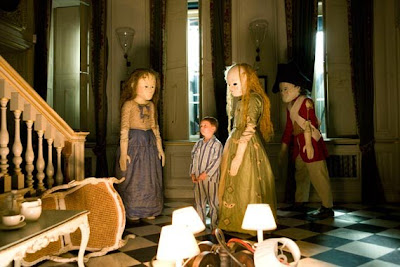 This is one of those Eleventh Doctor stories where reviewers are likely to bandy the words 'dark fairytale.' However, this story fails to really understand how fairy tales work. Most fairy tales are about how the young protagonist is isolated and alone, yet learns to be independent. Fairy tales are about the protagonist being empowered. While the protagonist may be assisted by a friendly gnome or a fairy (clearly the role intended for the Doctor), this assistance empowers the protagonist and in the case of Rumpelstiltskin, the fairy helper actually becomes the problem. Contrast this with George in Night Terrors- he is simply there to be rescued by the Doctor and in the end is saved by the love of his adopted father. Protagonists in fairy tales usually don't have a father who is around to save them; they have to learn to rely on themselves. I don't think Night Terrors (or any other Eleventh Doctor story) is a fairy tale in any meaningful sense.

Given that Doctor Who is a children's' program, the absence of child actors in the long history of the show is very notable. There was always an appreciation that children are not very interesting, especially to child viewers. This is particularly merciful as child actors tend not to be very talented. George in Night Terrors is not much fun to watch really. I have no idea why Moffat thinks it is necessary to throw so many children into the program. It's not necessary all that fairytaleish, as a lot of fairy tales have young adults or teenagers as their protagonists anyway.

Taking heavy influence from horror movies, Night Terrors tries hard to be scary. Unfortunately this largely fails. The heavy dose of humour does not help. Things that are funny tend not to be terribly scary and the episode ends up pastiching its horror influences rather than reworking them into something genuinely chilling. Night Terrors is yet another reminder that putting a Yeti in a loo does not always make for terrifying television. We have to really believe that a Yet is likely to be there; otherwise it turns into comedy.

The portrayal of the Doctor here becomes especially irritating. He has become a figure who is just too kind, too paternal, too saintly. There is no sense that this Doctor has any flaws or selfish tendencies. It's impossible to imagine the First or Seventh Doctor being so concerned about child's anxiety about monsters. The First Doctor wouldn't have cared a jot and the Seventh Doctor would be too busy fighting cosmic evil from before the dawn of time.

In The Unquiet Dead, Gatiss made some uncomfortable noises on the subject of immigration. It looks like he may have put his foot in it again. Daily POP points out his insensitivity in handling the subject of adoption, portraying it as something unnatural, alien and frightening.

The ending, with Alex affirming his paternal love for George comes across as horribly mawkish. As conservative as my own values are, I do feel that Doctor Who needs to give us something just a bit more radical and subversive than the message we get from Disney movies. The Doctor exists in a dark and menacing universe in which not everybody does have a loving dad to affirm them. The last couple of seasons have seen Doctor Who offering a very shallow middle-class perspective on life.

Night Terrors is yet another disappointment from the current series of Doctor Who and yet another uninteresting and uninspired Gatiss offering.

Posted by Matthew Celestine at 05:47