Listen to yourself, Moffat! 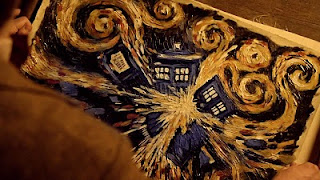 "It's hard to create shock in Doctor Who when we've already blown up the universe a couple of times. What do you do next?"

Guardian: Doctor Who: it's back – promising to be the scariest and darkest yet

In this interview with the Guardian, Steven Moffat put his finger on exactly the problem with the show he is supposed to be producing. The drive in the BBC Wales series to make everything bigger and better, more headline grabbing and with ever bigger explosions reached the level of absurdity with the season finale The Big Bang. When the Doctor has witnessed the destruction of the universe and then created a second Big Bang and thus re-created the universe, what can he do next? He might as well just be a god and sit in some Time Lord heaven. Nothing can ever beat recreating the universe.

Not that Moffat is likely to learn from this. Instead the race to outdo ever other season for the spectacular will continue and bore all of us to tears eventually. The Doctor cannot simply go on defeating ever bigger cosmic threats. Past Doctor Who season finales did not always go for the big bangs:

The Reign of Terror- A plain old fashioned historical drama.

The Time Meddler- An historical with a light-hearted sci-fi twist.

The War Machines- A threat to life on earth, but the kind that would become standard in Doctor Who. WOTAN did not need to threaten the entire universe to make an interesting story.

Horns of Nimon- A light-hearted adventure on a distant planet.

Survival- A planet explodes, but it's not earth. A council estate setting and a subtext about menstruation.

Producers in the classic series did not feel the need to end every season with a cosmic calamity and the biggest television spectacle ever. Part of the reason why Davies and Moffat have fallen into this trap of diminishing returns is their over reliance on story arcs. Building each season around story arcs creates an expectation of something really amazing at the end that will invariably disappoint.
Posted by Matthew Celestine at 03:07